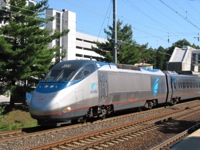 Yesterday Governor Bill Ritter said Colorado will join New Mexico and Texas in a plan that will create a high-speed rail line alongside I-25 between Denver and El Paso, Texas, linking the region’s major cities.

It would be a coup, especially since Colorado was ignored when the Obama administration issued a preliminary list of 10 national rail corridors that will be built with $13 billion in federal money, writes the Denver Business Journal.

Congress has authorized up to 11 rail corridors, but the region must undertake a significant amount of work first, including a $5 million feasibility study–a move also backed by New Mexico and Texas governors Bill Richardson and Rick Perry.

Critics of high-speed rail, including the conservative Independence Institute, call the idea a bad deal for taxpayers. A recent report by the organization says rail lines would fail to “relieve congestion, save energy, or reduce greenhouse gases,” and would cost every Colorado resident $9,000 (via the Denver Daily News). Meanwhile, The Associated Press reports that officials in Wyoming are looking to connect rail lines that would run north from Denver to Cheyenne.