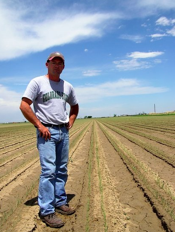 Larry Seastrom founded the New Frontier Bank in Greeley in a double-wide trailer a decade ago and grew its assets to $2 billion by lending to local businesses and farmers. But New Frontier lent recklessly in recent years, and its assets were essentially “a financial mirage,” Fred Joseph, Colorado’s banking commissioner, recently told The Wall Street Journal of the bank’s sudden collapse and closure by regulators in April. Now the Congressional Oversight Panel will travel to Greeley for a hearing on credit markets and how federal money might prevent farms that relied on the bank–the largest lender in northern Colorado–from going into foreclosure, according to the Fort Collins Coloradoan. The hearing is at 10 a.m. Tuesday in the Weld County Centennial Center in Greeley, 915 10th Ave. Seastrom isn’t listed among those who will testify, like Mike Flesher, executive vice president for Farm Credit Services of the Mountain Plains, and Marc Arnusch (pictured), owner of Marc Arnusch Farms, among several others, writes the Northern Colorado Business Report. Meanwhile, the feds are preparing to auction off “three-quarters of a billion dollars’ worth of agricultural loans left behind by failed New Frontier Bank–the biggest sale of its kind in decades,” reports The Denver Post. Colorado banks declined to purchase the loans.