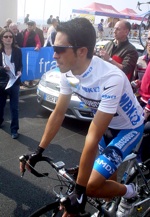 Contador currently rides for the same team as seven-time Tour de France champion Lance Armstrong, who is leaving the squad to form a new one with RadioShack. Armstrong didn’t celebrate his teammate’s victory after the race ended Saturday, choosing instead to drink wine with his new American sponsor (via VeloNews).

Several other teammates are joining Armstrong, and Contador will have some decisions to make. Garmin-Slipstream won’t be the only squad chasing him. VeloNews reported last week that the Spaniard will be courted by a team sponsored by a Spanish bank and Renault, a European car manufacturer.

It would be a major coup in the cycling world for Garmin-Slipstream to land Contador. Squad member Bradley Wiggins finished in fourth place, and Christian Vande Velde finished in eighth, an impressive feat considering he’s just a couple months past cracking three vertebrae in a crash (via 5280).