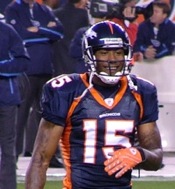 On the national level, the news that former Atlanta Falcons quarterback and current convicted felon Michael Vick signed with the Philadelphia Eagles last night (via ESPN) will gobble up most of the NFL headlines for the next few weeks.

But in Denver, we’re awaiting the big news on the looming verdict in the Brandon Marshall trial.

Marshall, the Denver Broncos’ adroit but disgruntled wide receiver, sat in an Atlanta courtroom yesterday, listening to his ex-girlfriend and a prosecutor tell a jury that he attacked her in March 2008 after an argument, reports The Denver Post.

Marshall’s attorney pointed out that the accuser sent Marshall two letters drafted by two attorneys asking for $100,000 and $500,000 each in an alleged “shakedown.” The jury reconvened at 9 a.m. EST today.

Meanwhile, Marshall’s teammates are in San Francisco, where they will take on the 49ers in a preseason game, the first time rookie head coach Josh McDaniels will lead his team in battle, a situation loaded with story lines, writes InDenverTimes. The game (8 p.m., KCNC channel 4) will be one of many uphill battles the Broncos and McDaniels will face this year. As the Post pointed out yesterday, the Broncos’ scheduled opponents look like a “pack of forecasted doom.”

Looking to assuage my fears, I was among thousands last night to pick up a copy of Madden NFL 10. I popped in the game, hoping that its creators would reflect my optimism for the Broncos by making them strong.

I got my butt kicked.