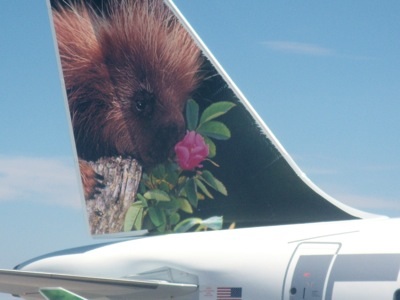 You might have a lot to gripe about when it comes to air travel. But Denver-based Frontier Airlines employees want you to know they’re very proud of their work. So proud, in fact, that they’re marching peacefully with bells and whistles to Mayor John Hickenlooper’s office today at noon in a campaign to “Save the Animals,” according to Web pages they’ve established at SaveFrontier.org and on Facebook: “We will not stand by and do nothing and watch our company disappear without a fight. Frontier provides a huge service to the people of and the visitors to Colorado. If we go, it’s their problem too.” Frontier, emerging from bankruptcy, is the object of an intense bidding war between Republic Airways Holdings (ready to plunk down $109 million) and Southwest Airlines (which has raised the offer to $113 million), writes the Dallas Morning News. Bids are due by August 10 and will be followed by an auction, leaving the fate of Frontier and its animal-clad planes unclear. As the Denver Business Journal points out, fear abounds that Frontier could simply be absorbed—in other words, “disappear as a separate entity if competitor Southwest Airlines buys it.” From Southwest’s perspective, the purchase would be a coup, combining Denver International Airport’s No. 2 and 3 carriers. But as Frontier spokesman Steve Snyder tells 7 News, nothing is a done deal yet. Myriad details must be taken into account.

“It is not a specific mathematical equation for figuring something like this out, which is why we caution people about speculating on the ultimate outcome,” he says. Meanwhile, Frontier CEO Sean Menke has sent a letter to employees, asking them to ignore the speculation: “I need you to focus on running our airlines safely and efficiently and on providing our customers with outstanding service like never before.” Doesn’t exactly sound like Menke will be at the mayor’s office today.