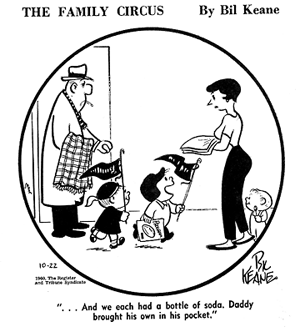 There’s a long-running debate among journalists regarding Family Circus cartoons. The aw-shucks, ain’t-that-just-precious comics are either helping to sell newspapers or killing them slowly with cornball cuteness. After all, this is the era of subversive television cartoons like “Family Guy,” but “no one told the newspaper business, where executives are swinging the ax with renewed vigor this week,” writes MediaDailyNews. Now, The Denver Post is checking its cornball vs. classics meter, using a poll to see just how bonkers readers are about certain comics. Think The Family Circus (sweet, un-political, and idealistic) vs. Doonesbury (’60s-era, Hunter Thompson-esque, and willing to go out on a limb). But don’t expect any radical changes. The Denver Public Relations blog compares the poll to offices that use decoy thermostats to give employees the illusion that they can control the temperature. The Post could gather the information other ways, the PR blog writes, “but it would rather create a way for all the cranks who bitch and moan about the comics to think their voices are being heard.”