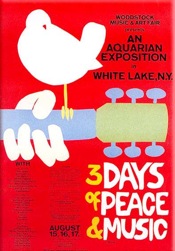 The anniversary of the Woodstock Music & Art Fair—the massive 1969 rock concert that defined the hippie generation—has become more nostalgic lately. More than one-third of the 32 acts that performed at the original Woodstock have lost members, including to drug overdoses, writes USA Today, and, let’s face it, the tie-dye-wearing boomers aren’t getting any younger. The 40th anniversary spawned sentimental news stories across Colorado over the weekend, contrasting suburban bliss with images of a half-million mind-altered people rolling around in the mud. To Martha Slonim, a Long Island gal who’s now 60 and living in Colorado Springs, the festival remains “such a big fog.” “I remember hearing Richie Havens,” she tells the Gazette. After Woodstock, Slonim was inspired to backpack through Europe, as was John La Ferlita, then a 23-year-old from Brooklyn and now a Boulder resident who teaches online courses for Loyola Marymount University and Colorado School of Mines.

“It was two of the most memorable days of my life,” he tells Boulder’s Daily Camera. Brent Green, the author of “Leading-edge Baby Boomers: Perceptions, Principles, Practices, Predictions,” opines in The Denver Post that “a better America emerged from Woodstock.” Meanwhile, Post columnist Mike Littwin totally missed all the noise—the defining moment of his generation—because he was, like, busy. “Or something.” Woodstock’s free-spiritedness feeling irrelevant in economically depressed 2009? Maybe the hit television series “Mad Men,” which premiered its third season last night, is more your speed. New York Times columnist Frank Rich compares the show’s early-1960’s political climate to today’s, while Timothy Egan tests out “how distant the near past really is.”