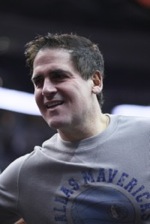 It’s been an eventful offseason for Nuggets all-star forward Carmelo Anthony, whose superstar status had him crisscrossing the globe for basketball camps, charity events, and other commitments.

That didn’t stop him from fitting regular workouts into his routine and showing up at the recent Nuggets’ preseason camp 15 pounds lighter than he was last year, ready to set out on another championship run (via The Denver Post).

Power forward Kenyon Martin has also had a busy off-season, albeit a much more antagonistic one. Martin tells Yahoo! Sports that crabby Dallas Mavericks fans drove by his Arlington, Texas, home at least a half-dozen times this summer, shouting insults and calling him a thug.

The catcalls date back to last season’s playoffs, when Mavericks fans were upset with Martin—and the tenacity of the Nuggets’ defense—during the second round of the playoffs. Mavericks owner Mark Cuban even told Martin’s mother her son was a thug, and they two have been feuding since. Martin says he still strongly dislikes Cuban (pictured), calling the histrionic owner a “tuck-your-tail-between-your-legs coward.”

Martin is jacked up and ready to play, but count fan blog Denver Stiffs as one site that isn’t drinking the Nuggets’ Kool-Aid just yet. The Stiffs call the Post story on Anthony’s offseason commitment an “annual pre-season puff piece,” adding the Nuggets won’t even sniff the NBA Finals without Melo having his best year ever.