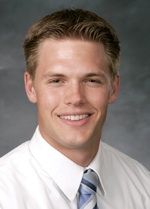 Tomorrow’s football game between the Colorado State University Rams and the Brigham Young University Cougars will be a good one to watch for a lot of reasons. The Rams are playing well this year, off to a 3-0 start under second-year head coach Steve Fairchild.

BYU has also been impressive this season, most notably for the 14-13 victory over the heavily favored Oklahoma Sooners in the first game of the season.

But The Salt Lake Tribune finds at least one BYU player who is pumped up for another reason: Tight end Andrew George says he’s not at all surprised the Rams are playing well this year and won’t deny his happiness for them.

George (pictured) grew up in Englewood, rooting for CSU (along with BYU and the University of Colorado), and remembers the Cougars won last year’s game 45-42 on a late touchdown. He knows it will be a tough game and has a lot of CSU alumni friends who will travel to Utah to catch the game and razz him.

Two other players from BYU also have deep Colorado ties: Defensive end Brett Denney grew up in Thornton and was recruited by CSU before choosing BYU, and starting right tackle Nick Alletto went to Ponderosa High School in Parker. The familiarities may reach beyond individual players to the two programs themselves.

The Fort Collins Coloradoan notes that CSU’s football program is on the rise, much like BYU’s was a few years ago, when coach Bronco Mendenhall arrived at the school. He went 6-6 in his first season, won the Mountain West Conference titles the next two seasons, and led his team to a combined 32-4 record over the past three years.

Coach Fairchild is on a similar trajectory in Fort Collins, telling his players that the team can return to its mid- to late-1990s stature, when the Rams were winning several conference championships and peaked at the number 14 spot in the nation’s Top 25. A big step along the ladder to national relevance comes tomorrow, when the Rams have the chance to take down number 19 BYU.