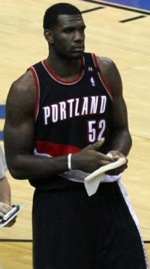 The Denver Nuggets dropped a close one yesterday in preseason play, losing 98-96 to the Portland Trail Blazers. Portland star Greg Oden, who sat out his rookie year and a big chunk of his second year with injuries, put up 16 points and seven rebounds (via The Associated Press).

The Denver Stiffs blog is picking the Trail Blazers to win the Northwest Division, citing good coaching, depth, youth, and a guy named Brandon Roy—one of the best players in the league.

But Stiffs thinks the Nuggets also have a chance to win the division on the backs of superstar Carmelo Anthony, veteran point-guard and Denver-native Chauncey Billups, and the enigmatic two-guard J.R. Smith, who can light up the scoreboard in a matter of minutes. Stiffs worries, though, that stellar play from Billups and the us-against-the-world mentality that fed the Nuggets last year won’t align again this year.