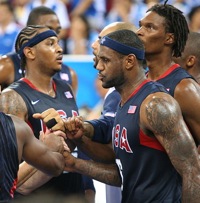 While the Colorado Rockies were getting ready to lose game three of the National League Division Series Sunday, the Denver Nuggets were halfway across the world, gearing up for the regular season.

Carmelo Anthony scored 45 points to lead the Nuggets to a 128-112 preseason win over the Indiana Pacers during a game in Beijing (via The Associated Press).

Anthony led the way at the Wukesong Arena, the same place he helped the U.S. men’s basketball team win the gold medal during the 2008 Summer Olympics (pictured, far left). Anthony looked to be in mid-season form, Nene seemed to be back to his dominating ways, and Kenyon Martin and J.R. Smith put up impressive numbers, as well.

The balanced performance goes along with a recent analysis from the Bleacher Report that showcases 10 reasons the Nuggets can win it all this season. From the little-known Johan Petro and his better-than-average rebounding abilities to the additions of Joey Graham and Aaron Afflalo, this team is at least as good as the squad that came within a few bad plays of a trip to the NBA Finals earlier this year.

The team is also relying on people like Dean Oliver, the director of quantitative analysis, who breaks down numbers you won’t see in a box score and helps put the team in position to win, writes The Denver Post.