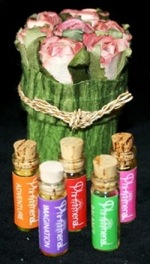 If you don’t smell good, it’s hard to perform at your best. Michelle Roark, a Denver-based Olympic freestyle skier, is taking that theory seriously, creating a line of perfumes she promises will allow users to maximize their potential. Roark, who is two classes short of a chemical engineering degree from the Colorado School of Mines, tells The Wall Street Journal the smells we associate with success can push us over the top. She’s developing several scents for her fledgling fragrance line Phi-nomenal that are named for the conditions they’re intended to elicit: Confidence, Focus, Balance, Adventure, Imagination, and Real, which supposedly grounds the user in the moment. The Journal points out that some scientists are skeptical of the scientific theory underlying Phi-nomenal, saying memories associated with smells are subjective and will therefore evoke very different sentiments to different people. But some will be able to associate the smells with past successes and use the confidence going forward. At least that’s what Roark is banking on, not only for her burgeoning business, but for her run at a gold medal at the 2010 Winter Olympics in Vancouver.