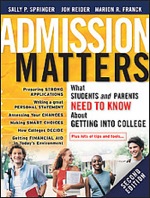 These days, many high school students don’t go to the bookstore to find guides on college rankings or buy a roll of stamps to send out their college applications. From selecting prospective schools to requesting their transcripts and sending in typed essays and applications, students go through most of the process online, rarely touching pen to paper—if at all, according to Boulder’s Daily Camera. “If you had to have them fill it out with paper and pencil, many would have a hard time doing that. They are so used to doing stuff online that it’s second nature to them,” says Boulder High School counselor Andrew Tucker. “Every college has a Facebook page, and they are tweeting like crazy. Things are changing dramatically.” Even counselors are going electronic at Web sites such as Naviance.com. Still, the business of college admissions in some places isn’t as straight-forward as some would hope. Odious influences remain, allowing some students entry thanks to family ties, wealth, or political connections, as The Atlantic notes. And despite the electronic revolution, some books about college are still worth buying, writes The New York Times, including “Admission Matters,” by Sally P. Springer, Jon Reider, and Marion R. Franck. It’s a good read for the overwhelmed or underprepared student and aims to cut down the hype surrounding the process, while emphasizing finding the right fit.