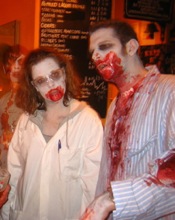 Daniel Newman, who invited as many as 4,000 fellow zombies to the 16th Street Mall last weekend, has received a $1,000 bill for his wildly fun Zombie Crawl. “Basically, the Downtown Denver Partnership, the guys who manage the mall, without e-mailing us or asking us if we could help clean up, considered all the fake blood to be the same as graffiti and handed it to that department,” Newman tells Westword. Newman, the founder of the crawl, invested $2,000 to promote it and says he was otherwise psyched by how things went, including the turnout. In four years, the crawl has grown from about 80 people to thousands. Meanwhile, Hapa Sushi, known for kinky fare such as the Booty Call Roll and Multiple Orgasm Roll, has devised a publicity stunt meant to help Naked Pumpkin Run participants cover up should they feel compelled to do so. The restaurant, which expects to be on the running path, is giving out sexy orange undies branded with “Hapa,” according to the Daily Camera.