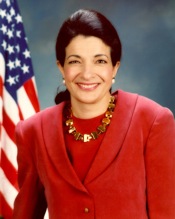 Yesterday, Senator Olympia J. Snowe of Maine was the only Republican to vote with Democrats on the U.S. Senate Finance Committee to approve $829 billion in legislation that aims to address the rising cost of health insurance and offer consumer protections.

“Is this bill all that I would want?” Snowe asked a hushed committee room (via The New York Times).

“Far from it. Is it all that it can be? No. But when history calls, history calls. And I happen to think that the consequences of inaction dictate the urgency of Congress to take every opportunity to demonstrate its capacity to solve the monumental issues of our time.”

The bill has no public option as it heads to the full Senate. However, Senator Mark Udall, a Colorado Democrat who calls the committee’s bill imperfect, says he will work now with colleagues “to include a public insurance option and a provision that will help recruit and train more doctors to practice in rural communities” (via the Denver Business Journal).

Slate confirms that efforts are now afoot to restore a public option, and one “powerful argument for doing so comes from an unlikely source: the private health-insurance lobby.”

In Britain, Mary O’Hara, who writes for the Guardian, expresses pity for Americans without insurance. The headline to her piece notes, “Healthcare may be a political football here [in Britain], but thank your lucky stars we don’t have to beg on the streets to pay for lifesaving treatment.”