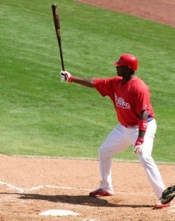 The Colorado Rockies find themselves in a do-or-die situation this afternoon, facing elimination in the National League Division Series. They dropped game three, 6-5, on a ninth-inning sacrifice fly by Phillies slugger Ryan Howard (pictured) and couldn’t bring home two men on base to win the game (via The Denver Post). More beguiling is the way Rockies closer Huston Street lost the save. It’s not all his fault, considering the Phillies’ Chase Utley made it to base thanks to a blown foul-ball call by the umpires. The plate umpire admitted after the game that he blew the call, notes MLB.com, but it’s a little late now. Perhaps the synapses in the umpires’ brains weren’t firing correctly. After all, they’d been standing outside for about four hours in temperatures that tied the coldest-ever in a baseball playoff game. Major League Baseball postponed game three Saturday night, fearing cold temperatures would inhibit exciting baseball (via The New York Times). It felt just as cold last night, though, with the crowd bundled up as if they were at a football game. And so here we are, about to watch the Rockies’ magical turnaround come up just a touch short—or keep moving on. The season comes down to this afternoon at 4:07 p.m., when the Rockies will go against Phillies pitcher Cliff Lee, a man who utterly dominated them in game one.