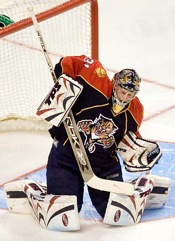 The Colorado Avalanche have been getting rave reviews on the national level for the team’s surprising 2-0 start. The Avs’ 3-0 win over the division-rival Vancouver Canucks suggests this team may not be as bad as many predicted.

One of the bright spots has been the play of new goalie Craig Anderson, who was named the NHL’s Second Star of the Week yesterday. Anderson, who came to the Avs in free agency after three years with the Florida Panthers (pictured), has been a virtual wall in front of the net for the Avalanche so far this year.

He’s stopped 73 of 75 pucks opponents have shot his way, and boasts a 1.00 goals-against average and a .973 save percentage (via NHL.com). That shouldn’t be too much of a surprise: Anderson finished third among NHL goaltenders last year.

NHL.com also points out that the team’s success has something to do with the consistency across the entire lineup. Through two games, seven players on the squad have recorded two or more points (goals or assists), and 12 of the 18 players overall who have skated for the Avalanche so far this year have recorded a point.

SportingNews.com calls the Avs the most surprising team of the season so far, showing just enough promise to take them off the floor of SportingNews.com’s first regular-season poll. Still, the site ranks the Avalanche 27 out of 30 NHL teams. Regardless, hockey has been great to watch—as long as you don’t have DirecTV, which is in a bitter contract dispute with Versus, the Comcast-owned outlet, for many Avalanche games (drama breakdown via Yahoo! Sports).