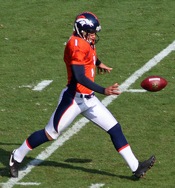 After a long week off, the Denver Broncos got back to work yesterday. The first order of business was waiving punter Brett Kern (pictured). He was cut in favor of former Pittsburgh Steelers punter Mitch Berger, who has several Colorado connections.

This will be his 16th season as an NFL punter and kickoff specialist (including preseason games), and the Broncos will be his 12th team. Berger has a Super Bowl ring and two appearances in the Pro Bowl, and he definitely knows how to party, as Deadspin points out (with photos). Mile High Report thinks Kern has talent but has lacked the ability to put the ball where the team has wanted him to.

With Berger in place, the team has begun to focus on November 1 and the Baltimore Ravens. Head coach Josh McDaniels says the Ravens are the type of team that can embarrass opponents through brute strength and an electric offense (via the Post).

The Broncos will need all the support they can get to come out on top, but fans can show loyalty in more ways than one: Pro Bowl voting is open (via NFL.com), so vote early and vote often if you want your favorite Bronco to play among the league’s best.