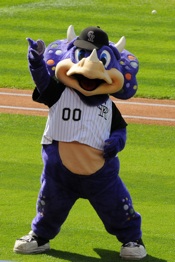 The Colorado Rockies clinched their third-ever playoff berth with a 9-2 win over the Milwaukee Brewers yesterday, the second postseason appearance for the team in three years.

It may seem like a no-brainer, given the team’s stellar play over most of the summer. But remember the first two months of the season? They were pitiful.

The Rox were the second-worst team in the league as of June 3; the team’s record of 20-32 put them just ahead of the Washington Nationals, recalls The Denver Post.

Since then, the Colorado team’s gone 71-36 and has been one of the best in baseball. It’s not over yet, though, as the Rockies head into this weekend’s three-game series against the Los Angeles Dodgers down just two games in the National League West. With a sweep, the Rockies would win the division.

Both teams are guaranteed playoff spots, but the division is up for grabs. ESPN suggests the Rockies should try to rest key pitchers in order to keep them fresh for the first round of the playoffs—and forget about seeking what would be the franchise’s first-ever division title. But with the way LA has been choking lately, the NL West title might actually be within reach (via the Orange County Register).

Starting pitching has been a key to the Rockies’ success. Fox Sports points out that five starting pitchers have at least 10 wins, a first for the franchise, and the first time it’s been done in baseball since 2005. The Rox also have eight players with double-digit homerun totals, and two more just a couple knocks shy. Bottom line: This team is made up of selfless players who banded together to guide a listless ship onto the high seas.