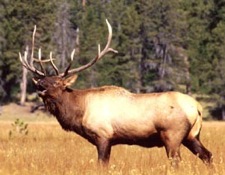 It’s that time of year in Colorado, when thousands of people flock to Estes Park in their SUVs, cameras and/or binoculars in hand. They come to watch the elk get naughty. That’s right. It’s mating season, and the male elk are bugling and living a David Letterman-style dream by rounding up harems of numerous females. But in the end, just like any night at a bar in LoDo, the females ultimately pick the males. What do they look for? “Antlers that are symmetrical,” Bob Kreycik, a Loveland resident, retired veterinarian, and longtime volunteer to the National Park Service, tells The Aspen Times.

And the bigger the antlers, the better: Six or more points indicate incredible virility. But there are too many elk in the region, and some of them are becoming aggressive with the tourists, according to the Colorado Division of Wildlife, which has a plan that would make the really aggressive elk a little less, er, horny. Wildlife officer Rick Spowardt says this is “probably the most active season” he has seen, adding that some elk are chasing people around—even on the local golf course. The answer in at least one case has been to tranquilize a bull and then saw his antlers down. Spowardt tells 9News he felt he had no other choice: “I felt sorry for him, but I think it was preferable than him injuring somebody or worse.”