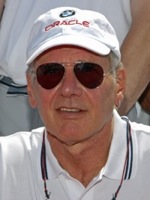 Harrison Ford, Star Wars’ original Han Solo and a real-life pilot, will appear at a gala next month to raise funds for Denver’s Wings Over the Rockies Air & Space Museum. On November 14, he’ll receive an honor meant for “those who have dedicated their lives to flight and advances in aviation,” writes 9News. Ford supports the Experimental Aircraft Association and chaired its Young Eagles program, says Greg Anderson, president and CEO of Wings Over the Rockies, adding that the museum is collaborating with Ford to produce a film about aerospace in Colorado. Ford’s next film, “Extraordinary Measures,” is schedule to debut next year. So far, it has been received well by test audiences, according to The Scorecard Review, which nonetheless dings the actor for a lack of critically acclaimed films in recent years.