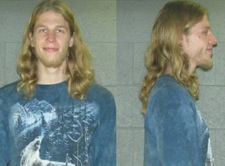 The pictures of Lance Hering, the former Marine from Boulder who staged his own disappearance in the summer of 2006, are telling. In Hering’s mug shots, taken months ago when he was arrested and posted by Fox 31, Hering’s hair is hippie-long. In a photo taken yesterday by Boulder’s Daily Camera, Hering’s hair is cut short as he walks with his attorney after reaching a plea agreement. The photos illustrate that his ordeal, which began when he attempted to avoid returning to Iraq, is over.

Hering’s contrived disappearance cost the county tens of thousands of dollars, which were used to launch a manhunt. Hering struck a deal with prosecutors and pleaded guilty to a misdemeanor charge of false reporting for the rock-climbing accident he faked in Eldorado Canyon State Park. In exchange for the guilty plea, he avoids a trial and gets a continued deferred sentence on a felony attempted burglary case from 2004. Hering must complete 200 hours of community service and attend therapy sessions to treat the stress and trauma that stem from his service in Iraq. While his family has repaid the money for the manhunt, Hering was recently punished by the Marines, serving 33 days in the brig at Camp Pendleton in California before he was discharged.