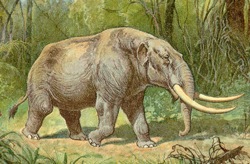 Tyler Kelley and Jake Carstensen were poking around a stream near Ken-Caryl Ranch’s community pool after a heavy storm and discovered something unusual: a bone with a large tooth on it. The 13-year-old friends rushed home with their discovery, looked it up on the Internet, and found that it belonged to one of those furry, elephant-like beasts with the big tusks known as mastodons, which 50,000-150,000 years ago likely gobbled up plants along the Front Range. The discovery was announced by the Denver Museum of Nature & Science Saturday, writes 7News. After the initial find, a five-foot tusk was located, making these the most significant mastodon fossils ever unearthed in Colorado and the first in 85 years, according to The Denver Post, which adds that mastodon bones are more common in Michigan and Ohio and in the Northeast. Moreover, the site has also produced the tooth of a horse that probably last galloped about 100,000 years ago. These are just the latest interesting fossil finds along the Front Range in recent weeks. Rail workers uncovered fossils of ancient palm trees, ferns, and flowers near Sixth Avenue and Simms Street that are roughly 66 million years old.