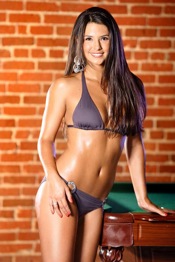 A hat tip to Michael Roberts over at Westword for pointing out that Denver native Renee Herlocker has been named the “Ultimate Spike Girl” at the testosterone-laden Spike TV network.

We can’t say we’re surprised. We picked Herlocker, a former Broncos cheerleader, as one of our Top 20 Singles more than two-and-a-half years ago.

Back then, Herlocker told us she was a true Colorado girl: “I am very outdoorsy and can get my hands dirty. I can pitch a tent and build a fire and all that.”

We also put Herlocker on that month’s cover—albeit, in a slightly less risque pose than those Spike offers.