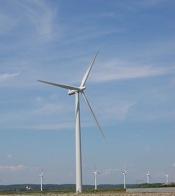 It was a good day for wind power in Colorado, unless, of course, you were betting on Entegrity Wind Systems Incorporated, a wind-turbine manufacturer with some operations located in Boulder. The Canadian-based company locked its offices there due to bankruptcy, reports the Daily Camera, which adds that Entegrity Wind lacked a plan to tackle millions of dollars in debt. Meanwhile, another renewable-energy company debuted in the state yesterday. Governor Bill Ritter and Denver Mayor John Hickenlooper were joined by officials from Germany-based SMA Solar Technology to announce plans to open the company’s first North American manufacturing site in Denver. The Associated Press writes that the plant—slated for east Denver, near I-70 and a rail line—will start production next year, hiring 300 initial employees in a workforce that could expand to as many as 700.