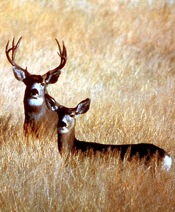 Joan Nutt beckoned a buck mule deer to her near her sister’s Florissant home, west of Colorado Springs, in an apparent attempt to pet it. The deer responded to her calls, approaching slowly before it finally lowered its head and charged. Nutt, 63, held onto an antler in an attempt to push the deer away, but it knocked her down and began stomping. Fortunately for Nutt, a passing motorist stopped and scared the animal off, writes The Denver Post. When medics arrived at the scene, they had to chase the deer away several more times because it kept returning. Nutt was eventually taken to Pikes Peak Regional Medical Center in Woodland Park and treated for minor injuries to her hands and stomach, as well as a leg, an arm, and a hip. Meanwhile, wildlife officer Aaron Flohrs says the buck still hovered at the scene when he arrived, an indication the deer had somehow become domesticated or was at some point treated as a pet by people. The animal was tranquilized and euthanized because it was deemed a threat, reports 9News. Ervin Stohl, Nutt’s brother-in-law, told wildlife officials the buck came near his house to mingle with does nearby, but “There were no does today, and the buck was angry.”