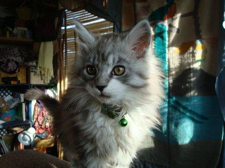 Disgraced former Illinois Governor Rod Blagojevich’s long-time pal and campaign manager, Alonzo Monk, agreed Tuesday to testify in exchange for a reduced sentence stemming from the case in which his boss is accused of trying to sell the U.S. Senate seat vacated by Barack Obama (via Politics Daily). Perhaps Blagojevich should have hired a cat to run his campaign instead. That’s what Rob Smoke, a candidate for city council in Boulder, has done (via the Daily Camera). When the Camera inquired as to why Smoke spent $14.37 of the $236 he’s raised on “dinner for campaign staff” from the pet store, Smoke claimed the purchase was for Sita, his cat/campaign manager (pictured). Smoke says he’s trying to make a point: “It’s just a general protest against the way expenditures are handled.”

Boulder’s campaign finance administrator, Dianne Marshall, doesn’t seem too concerned, saying the city code doesn’t specify how campaign money has to be spent; only that expenses are disclosed. “It’s not unusual that he would buy food for campaign helpers,” she says. And unlike Blagojevich, cats can’t testify against you if you get in trouble (although there is the cat box to contend with). Photo courtesy of Elephant Journal.