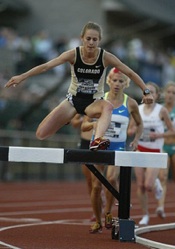 One of the University of Colorado’s most storied runners stumbled her way through her final race yesterday, failing to cap her amazing collegiate career with one last win.

She also holds the record in the steeplechase and the American collegiate record for the 1,500 meters, and she represented the U.S. in two world championships, as well as the 2008 Beijing Olympics. But a win as her swan song wasn’t in the cards.

Barringer—who finished in 163rd place in 21 minutes, 47 seconds—tells Boulder’s Daily Camera she may have put too much pressure on herself in the days leading up to the race. It’s understandable: Barringer will now sign a lucrative professional contract and has had coaches and agents in her ear.

The Longmont Times-Call reports Barringer will likely stay in Boulder after leaving CU to train professionally and is likely to earn good money. But for her, it’s about her team: “I hope that I’m a better teammate now than some big, awesome legacy. I really hope that’s what’s resonating with the women.”