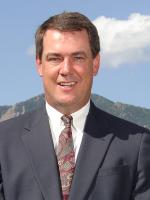 Things are looking worse for the University of Colorado football program, especially after Saturday’s 36-17 loss to Missouri. Most of the blame has been laid at the feet of head coach Dan Hawkins, who definitely knows how to talk a good game. Westword declares, “the Hawkins experiment has failed.” The Denver Post reports CU athletic director Mike Bohn (pictured) isn’t too concerned that many fans think he should be out looking for a new job—along with Hawkins. Apparently, he’s too busy raising money and trying to attract new fans. That’ll be hard, considering the football team is 2-6 and looks as inept as ever. The combined records of the 2008 and 2009 football teams, along with last season’s men’s and women’s basketball teams, is 27-53, including 7-37 in conference play. In the academic year ending June 2008, the Post notes, Colorado’s athletic department generated $52.63 million in revenues, putting the school at seventh in the Big 12. While it might seem like a lot of money, it’s a far cry from the minimum $74.7 million the six schools ahead of CU pulled in. (The University of Texas led the way with $120.29 million.) So next time you think CU’s poor athletic performance means little more than crabby CU fans, think about the money. Photo courtesy of CUBuffs.com.