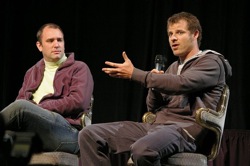 Trey Parker and Matt Stone have forsaken the area (Park County) for which they named “South Park,” their subversive cartoon series. Instead, the two have built their massive retreat in Steamboat Springs, reports Steamboat Today, which notes the abode’s many amenities: a balcony overlooking Steamboat Ski Area, a curved, granite kitchen counter, a 19th-century Japanese chest, a 110-inch projection screen, two dining rooms, two master bedroom suites—even a Japanese tea house. The $5 million home also claims many environmentally friendly features, notes The Associated Press, which reports that Parker and Stone have wanted to build a getaway in Steamboat since they were kids.