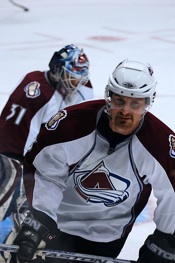 The surging Colorado Avalanche have come back to Earth, losing two straight games over the weekend after a franchise-record 10 wins in October.

Yesterday, the Avs lost 3-0 to the Vancouver Canucks, whose strategy included crashing the net against goalie Craig Anderson as often as possible, The Canadian Press points out.

The Avs mustered just 18 shots all game against Vancouver’s Andrew Raycroft, who was coming off a dismal performance Friday night against the Anaheim Ducks. The Avs had a real opportunity against Raycroft, who played last year in Colorado, writes The Denver Post.

Raycroft was subbing for Vancouver’s all-star goalie, Roberto Luongo, and the Canucks were missing several top offensive players. But the lack of offensive production from the Avs’ top line was a problem. The Post notes that Avs star Paul Stastny completed his 11th road game of the year without a goal, and veteran Milan Hejduk (pictured) notched his third-straight game without a point.

The good news is NHL.com‘s standings show the Avs still perched at the top, with 22 points—although they’re now joined there by the defending-Stanley-Cup-champion Pittsburgh Penguins.