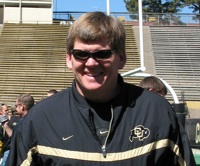 The University of Colorado’s 2009 football season will come to a merciful end today, when the Nebraska Cornhuskers come to Boulder. It’s been a rough year, to put it nicely, and things may not improve significantly anytime soon.

The university announced yesterday that embattled Buffs head coach Dan Hawkins will keep his job for at least another year, despite logging a downright embarrassing record over the last few years. CU athletic director Mike Bohn tells The Denver Post he trusts Hawkins, even though he’s frustrated with the team’s performance. At least Bohn is paying attention.

CU heads into today’s game a woeful 3-8 (2-5 in conference play), a true opposite of the hated Cornhuskers (8-3, 5-2 in conference play). Hawkins is guaranteed his fourth losing season in four years, with a 16-32 record and a pitiful 2-20 on the road.

CU President Bruce Benson tells Boulder’s Daily Camera the team’s players hold their highest collective grade-point-averages in years, and “the kids aren’t getting in trouble.” Benson apparently didn’t read a Denver Post story from January, which noted that in the previous 15 months, 13 current or former CU football players tangled with the law (recap via US News and World Report). So here we are, CU fans, with another year of mediocrity on tap.