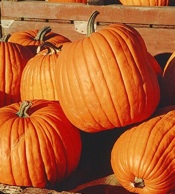 Even the BBC is reporting that the annual Naked Pumpkin Run, a “zany” Halloween tradition, failed to materialize in Boulder because of the threat of a police crackdown. Presumably, the Naked Pumpkin Runners didn’t want to be arrested and charged as sex offenders. The Mall Crawl returned to Boulder, but in a very mellow manner: 4,000 people showed up in costumes on the city’s Pearl Street Mall, watched closely by police officers, although there were few indications of a rowdy, alcohol-infused riot, as authorities had feared. Many people complained to the Daily Camera that police overreacted and made everyone feel guilty for simply wanting to go out and have some fun. I was there, and the best part was the impromptu dance performance of Michael Jackson’s “Thriller” video. Truly great. There were some fun political messages, too. Michael May and Gerry Callejo carried naked, inflatable men with jack-o-lanterns on their heads and a sign, “Free the Pumpkins,” causing the police chief, who was watching, to crack a “wry smile,” writes the Camera.

Meanwhile, the Posh Ultra Nightclub and Lounge at 4040 E. Evans Ave. in Denver could have used extra police, when gunfire erupted at closing time and then again 30 minutes later at a nearby McDonald’s, sending three men in their early 20s to hospitals, according to 9News. As for the kids, some dentists are worried about all that candy they got trick-or-treating, so they’re offering the kids $1 per pound in exchange. The dentists will send the sweets to troops in Iraq and Afghanistan (via Fox31).