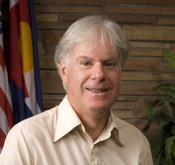 Boulder officials, who are lucky they don’t have to deal with the same headaches as President Barack Obama, may join an international organization that aims to eliminate nuclear weapons everywhere, reports the Daily Camera.

As the United States continues sensitive negotiations and gives Iran time to decide whether to accept a deal to part with nuclear materials that could be used in weapons (via Reuters), Boulder Mayor Matt Appelbaum (right) has formed a committee to study the idea of bringing his city into the fold of Mayors for Peace.

The group was established in 1982 by the mayors of the only two cities to face the unspeakable horror of nuclear bombs: Hiroshima and Nagasaki. More than 3,200 cities in 134 countries are part of the group, which lobbies at the United Nations for the elimination of nuclear weapons and wants military officials around the world at least to agree that cities are morally reprehensible nuclear targets.

About five years ago, former Boulder Mayor Mark Ruzzin signed a resolution supporting the notion, but Boulder never joined the mayors’ group. The city council is slated to discuss the idea at a meeting on November 17.

Meanwhile, fewer nuclear weapons exist now than before the fall of the Soviet Union. Some of the bombs, including Russian ones, have been converted into power sources that provide about 10 percent of electricity in the United States, writes The New York Times.