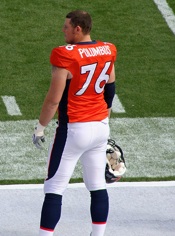 The Denver Broncos are feeling positive coming off a win in Kansas City last weekend, a rarity for the team in December. The buzz has faded a bit, however, as news dropped that starting right tackle Ryan Harris will miss the rest of the season and any potential playoff games due to a bum right big toe.

Harris dislocated the toe in the November 1 game in Baltimore, missing most of that game and four full games after, writes The Denver Post (free registration required). He returned to play last weekend against the Chiefs in Kansas City but quickly re-injured the toe. Tests at a sports medicine clinic in Vail reveal that Harris has bone and ligament damage.

Playing in Harris’ stead is the friendly giant known as Tyler Polumbus, a hulking figure who checks in at 6-foot-8 and 300 pounds (via NFL.com). Polumbus (left) is a familiar name in the Denver area: The second-year player was a star at the University of Colorado and at Cherry Creek High School. Polumbus has played pretty well filling in for Harris, and he’ll need to keep it up heading into this weekend’s game against the Indianapolis Colts.

Led by indefatigable quarterback Peyton Manning, the Colts sit at 12-0 this year and own a 21-game regular-season winning streak, tied for the longest such streak in NFL history. Bronco Talk notes that the game touts the most combined wins for two rookie head coaches in NFL history (12 for Colts head coach Jim Caldwell and eight for Broncos head coach Josh McDaniels) and that a key to the game will be running the ball and keeping Manning off the field.