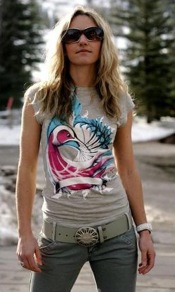 I had the pleasure of standing at the base of the 22-foot halfpipe during this weekend’s U.S. Snowboarding Grand Prix competition at Copper Mountain. Nobody was surprised that California’s Shaun White dominated the men’s competition, throwing down back-to-back double-cork 1080s, an off-axis, double-flip spectacle that very few riders can land in competition.

Zach Black, an 18-year-old ripper from Breckenridge, surprised everybody by finishing third, behind White and Louie Vito. Black tells The New York Times he was surprised with his finish and that he had just hoped to make the 16-man final. He admits to The Denver Post that he got a little lucky in that several riders didn’t land their runs, opening the way for him to make the podium.

Aspen’s Gretchen Bleiler (right), one of the biggest names in women’s snowboarding, finished in second place, going a long way toward solidifying her spot on the U.S. Snowboarding Team. Madeline Shaffrick, a 15-year-old rider from Steamboat Springs, finished sixth on the women’s side, and J.J. Thomas of Golden finished fifth on the men’s side.

The weekend wasn’t all good for Colorado winter sports athletes, however. Vail’s Lindsey Vonn finished eighth in this weekend’s World Cup slalom race in Are, Sweden, losing her overall points lead to Germany’s Maria Riesch (via The Associated Press). Vonn was coming off a dominating performance at World Cup races in Lake Louise, Alberta, blaming some of this weekend’s poor performance on crappy snow and foggy sections of the course in Sweden.