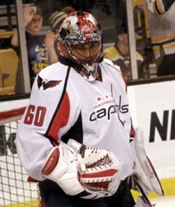 Colorado Avalanche star rookie Matt Duchene told The Denver Post he was looking forward to playing against the Washington Capitals and their star, Alexander Ovechkin, calling Ovechkin one of the best players on the planet. I wonder if he still feels that way today.

The Capitals—coming into Denver for the first time since 2006—utterly destroyed the Avalanche last night at the Pepsi Center, laying a 6-1 shellacking on the Avs.

Capitals’ goalie Jose Theodore played nearly perfect hockey, turning away 27 of 28 shots, nearly completing the shutout until the Avs’ T.J. Galiardi scored on the power play with 8:39 remaining in the game. Theodore (left), in his first start in Denver since leaving the Avs as a free agent after the 2007-08 season, tells NHL.com he has a lot of great memories from his time in Denver, saying he was a little sad to return to the city that his family loved.

On the other end of the ice, Avs goalie Craig Anderson put up one of his worst games of the year, allowing five goals on 21 shots and getting yanked for backup Peter Budaj to begin the third period.

The Post points out that losing to the league’s best team isn’t shameful, but the game was marred after the Avs’ David Koci laid an ugly hit on Capitals’ star defenseman Mike Green in the second period. Koci was called for boarding (he hit Green into the boards from behind without Green seeing the hit coming). Capitals’ coach Bruce Boudreau was livid over the hit, saying Koci exemplifies a typical goon: a big, bruising player who sits at the end of the bench and only plays when it’s time to make a hit or get into a fight.

“They come out and hit a guy for the sake of â€˜I’ve got to run around like an idiot or I’ll never play again,” Boudreau says. “Those are the guys we’ve got to get rid of.”