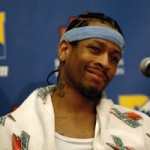 Tonight’s Nuggets game in Philly has enough story lines to satisfy the whole family. There’s the rags-to-riches-to-rags-to-redemption story of Allen Iverson, who’s making an NBA comeback in the city where he blossomed into a star. Then there’s continued talk of Carmelo Anthony as MVP, which becomes more realistic with every passing game. And, perhaps most intriguing, the Nuggets are playing in the hometown of disgraced former NBA referee Tim Donaghy the day after he admitted to 60 Minutes that he once bet on a Nuggets game knowing the refs would prevent Iverson (a Nugget at the time) from having a big night.

Donaghy is in the midst of selling a post-prison book called “Blowing the Whistle,” an insider’s account of how NBA refs are just as unscrupulous as we think they are. He makes some interesting points about Iverson. Specifically, Donaghy says he would always bet against Iverson’s team because so many officials hated him (excerpt via Deadspin). The Denver Post points out that in an odd twist, Iverson claimed the most free throws of any player in a January 7, 2007, Nuggets-Utah Jazz game, even though Donaghy told 60 Minutes he thought Iverson would be punished during the game (interview video via the Los Angeles Times). Interesting stuff, especially for those of us convinced the refs are out to get our favorite players or sabotage our teams. We might be right.