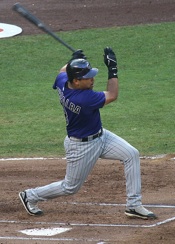 The Colorado Rockies are apparently struggling to re-sign catcher Yorvit Torrealba. The catcher is seeking at least $5.5 million, according to The Denver Post, but the Rockies have offered just $5 million.

It seems like good pay in our current economy, but in the fantasy world of professional sports, the gap between the two sides is enough to establish the possibility that Torrealba could sign with another team—perhaps with division-rival San Francisco Giants.

Meanwhile, the Rockies have re-signed Rafael Betancourt, a key relief pitcher acquired from the Cleveland Indians midway through the 2009 season (via 9News). Betancourt played an important role down the stretch in the team’s playoff efforts, often coming up with major pitches in clutch situations.

But the Rockies weren’t as lucky with starting pitcher Jason Marquis, an All-Star who earned 15 wins for the team in 2009 but seemed to fade as the season went along. He rejected the Rockies’ salary arbitration offer and will test the free-agent market. Marquis is reportedly upset about having not been included in the playoff rotation, which led to a falling out with the team. The Rockies will probably be OK without Marquis, considering left-handed starter Jeff Francis will return to the lineup.

Still, in its review of the best and worst aspects of baseball from the past decade, Sports Illustrated lists the Rockies’ boondoggle with pitcher Mike Hampton as the worst free-agent signing of the decade. Hampton signed an eight-year, $120 million contract with the Rockies in December 2000, for which the Rockies got half a good year and a whole lot of headaches. Rockies general manager Dan O’Dowd was eventually able to trade Hampton to the Atlanta Braves and avoid taking the full $120 million hit.