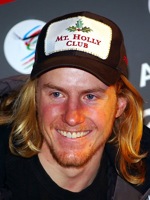 Beaver Creek wasn’t kind to the U.S. men’s ski team this weekend, but the team is nevertheless moving positively toward the upcoming Winter Olympics. Ted Ligety finished fourth yesterday in the giant slalom to complete a three-event World Cup weekend (via USA Today).

Ligety (pictured) was the U.S.’s best hope this weekend, and he finished better than any U.S. male at the event, which was swept by Switzerland’s Carlo Janka. Ligety, the 2006 Olympic gold medalist and the 2008 World Cup season champion in giant slalom, finished just .01 seconds away from a place on the podium.

Two-time World Cup overall champion Bode Miller was another story, finishing .41 seconds away from third, after what USA Today calls “one of his familiar edge-of-disaster” runs.

Miller returned to the U.S. men’s ski team earlier this fall after spending the last two seasons on his own, following a blow-up with the team after the 2006 Winter Olympics. Norwegian skier Aksel Svindal, a longtime rival of Miller’s, tells Reuters Miller’s delay in joining the U.S. team, and subsequent lack of consistent training, ensures inconsistency over the long run.

Things went slightly better for the U.S. women over the weekend, especially Vail’s Lindsey Vonn. After a disappointing show recently in Aspen, Vonn won back-to-back downhill races at a World Cup event in Lake Louise, Alberta, and finished second in the World Cup super-G (via the Vail Daily).