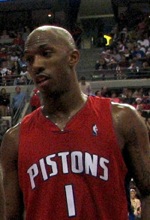 No Denver basketball fan can complain about the trade that brought Chauncey Billups to the Nuggets from the Detroit Pistons (pictured) in November 2008, especially after Billups led Denver to the brink of the NBA Finals last spring.

But the Nuggets came up short last night in Detroit. Billups missed a last-second layup, and the Nuggets fell 101-99 to the Pistons, finishing a disappointing 2-2 on a four-game road trip (via The Denver Post). The Nuggets played without an injured Kenyon Martin, but the team offered no excuses, especially since many of the Pistons’ best players were injured or not playing, writes the Detroit News.

Carmelo Anthony managed to score 40 points against the Pistons, keeping up his torrid MVP scoring pace.

The Nuggets look to return to consistent winning form when they reappear at the Pepsi Center for three home games against conference rivals, starting with the Phoenix Suns on Saturday night.