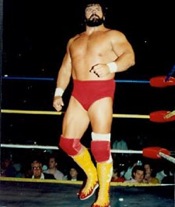 Steve Williams, a professional athlete from Denver who came to be known as “Dr. Death,” passed away Tuesday at 49. The former Lakewood High School and University of Oklahoma star athlete and professional wrestler died of throat cancer.

The Denver Post notes that Williams was a well-known pro wrestler in the 1980s and ’90s who went by the name Dr. Death, a moniker he earned after donning a hockey goalie’s mask to protect a broken nose during a wrestling match in Lakewood.

Williams was a two-time, Colorado prep wrestling champion and went on to a stellar career at Oklahoma, eventually playing football under coach Barry Switzer in 1982. He was diagnosed with throat cancer in 2003 and given six months to live, although he survived for at least six more years.

Earlier in 2009 he told the Post he’d been cancer-free since 2005, and friends were helping him fund an artificial voice box, which they presented to him at a wrestling event in the fall. Williams touched a lot of people over the course of his life, including officials still involved in Oklahoma wrestling. Current school wrestling coach Jack Spates tells the Associated Press Williams was “one of the greatest athletes that the University of Oklahoma has ever produced.”

The Oklahoman reports that Williams continued to pay homage to his alma mater by naming one of his finishing moves the “Oklahoma Stampede,” and sometimes entered the ring to a modified version of the OU fight song, “Boomer Sooner.”