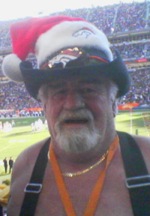 The Denver Broncos were able to claim a rare win in Kansas City yesterday, dominating the Chiefs 44-13 despite three turnovers by quarterback Kyle Orton. The Broncos now sit at 8-4, firmly entrenched as one of the AFC’s wild-card playoff teams.

Perhaps the Denver win was karmic payback for the Chiefs’ tasteless promotion of the game on their mascot’s Web site last week. The site featured a picture of their mascot jump-kicking Broncos superfan Tim McKernan, also known as the Barrel Man. McKernan (pictured) died Friday after a battle with lung disease (via The Associated Press).