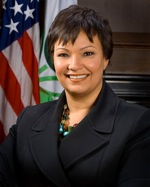 The pollutants that cause greenhouse gases, a good portion of them emitted from motor vehicles, are now officially dangerous to your health and to the environment. That’s according to the U.S. Environmental Protection Agency’s top administrator, Lisa Jackson (via U.S. News & World Report). The EPA’s finding isn’t just Jackson’s opinion, she says. Rather, it comes after years of intensive research. “The scientific community, the business community, and the policy world have spent decades studying greenhouse gas pollution and climate change,” Jackson (right) says, adding that “the threat is real.” Jackson’s announcement has sent shares of solar energy stocks rising, according to The Wall Street Journal. So now that the government has found greenhouse gases harmful, what will it do to protect public health? And will the EPA, or Congress, intervene? As answers to those questions seem inevitable, U.S. Representative Diana DeGette, a Denver Democrat, says the EPA’s decision is “a long time in coming.” U.S. Representative Mike Coffman, an Aurora Republican, chides the EPA, claiming it paves the road for a possible tax increase. The ruling “amounts to an end run around the American people by this administration,” Coffman says (via the Denver Business Journal). It’s “just another attempt by liberals to ram the same dangerous and unpopular policy down our throats.”