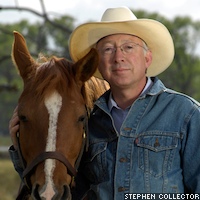 Interior Secretary Ken Salazar, who supports the Bureau of Land Management’s efforts to move thousands of wild horses onto pastures, has run into a political problem: A lot of people love wild horses and are not supportive of his planned roundups. Add several celebrities to the list of those who oppose Salazar, including singer Sheryl Crow, lefty pundit Bill Maher, and actress Lily Tomlin. Along with activists, who consider wild horses a historic treasure, opponents contend the government is exaggerating the need for roundups—that the BLM’s plan is not only inhumane, it’s unnecessary (via The Associated Press). Salazar proposes to relocate as many as 25,000 wild horses from their ranges in the West to pastures elsewhere in the nation. Terri Farley, who penned the “Phantom Stallion” children’s books, gave a board in Reno, Nevada, more than 200 letters from children who oppose Salazar’s plan. “Children will grow up to believe wild horses were like unicorns, existing in only stories,” Farley says.

Ginger Kathrens, executive director of the Colorado Springs-based Cloud Foundation is calling for the firing of BLM officials in charge of the wild horse program: “The current schedule of roundups would result in a nail in the coffin for many small herds.” BLM officials have said the roundups will prevent them from destroying herds that are growing in number, according to the Web site Red Orbit, which notes some ranchers view wild horses as a threat to their land and were allowed to kill them until 1971, when it was made illegal. Winter is the best season to view Colorado’s own wild mustang herds, as contributing editor Dougald MacDonald reported for 5280 last December.