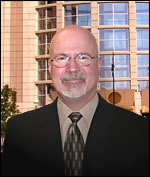 Jim Moore, Jefferson County’s top administrator, has been fired, just weeks after the county paid more than three-quarters of a million dollars to settle disputed age and sex discrimination cases in which he was named. It’s unclear whether the county’s commissioners, who voted unanimously to fire Moore (left) on Wednesday, did so because of the cases; the commissioners have declined to comment.

Jeffco spokeswoman Kathryn Heider tells The Denver Post Moore’s firing is a personnel matter and the reasons will not be made public. The firing came just hours after a federal jury delivered a verdict in favor of Mike Zinna, who had sued former commissioner Jim Congrove for allegedly violating his First Amendment rights.

Moore, who testified on behalf of Zinna, could not be reached for comment. The Columbine Courier, which broke the story, reported that the plaintiffs in the cases, Judy Goebel, the county’s former director of human resources, and Jere Bower, the former director of support services, were fired in 2007 when they were 58 and 54 respectively. Goebel also alleged sexual harassment. Open Space Director Ralph Schell will take on Moore’s job.