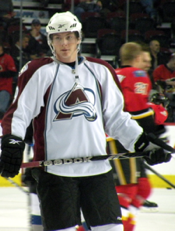 Let’s hear it for Colorado Avalanche rookie Matt Duchene, the NHL’s latest Rookie of the Month. The young gun has earned the title for scoring 13 points in December (five goals, eight assists), according to NHL.com.

Duchene, the team’s first overall draft pick earlier this year, edged out a group of other young stars, including the Avs’ T.J. Galiardi, for the much-deserved award. Duchene opened December with his first-ever three-point game, with two goals and one assist in a shootout loss to the Florida Panthers.

The kid is just one point away from the NHL rookie scoring lead after posting 20 points in 22 games and trails only the league’s first overall draft pick, John Tavares of the New York Islanders.

Duchene tells The Denver Post he didn’t even know there was an NHL rookie of the month award and that he might take himself out to lunch for winning it. He credits his teammates for the honor, as well as the fact that he’s finally adjusted to playing at the NHL level, something he struggled with early on in the year. He’ll be able to discuss the award with Tavares in person tonight, when the Avs take on the Islanders.

Colorado needs the win tonight, both to keep pace with the Calgary flames and to build some room against the Vancouver Canucks. The Flames sit in the Northwest Division’s top spot, with 55 points. The Avs are at 54 points, and the Canucks have 53 (via NHL.com).