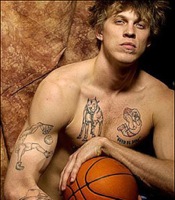 The night after one of the best games of the season—a thrilling 105-95 win in Utah, even without stars Carmelo Anthony and Chauncey Billups—the Nuggets came home and laid an egg, falling 108-105 to the hapless Philadelphia 76ers.

The simple truth in last night’s loss, and many others, is that the Nuggets lose when they don’t play with an urgency on the defensive end.

Coach George Karl tells The Denver Post the Nuggets looked like an offensive team trying to outscore its opponent, and the team isn’t great when the members play “cool and casual and think we’re good.”

Chris “Birdman” Andersen (pictured) left the game in the second quarter with a sprained ankle and will miss at least three games, reports the Associated Press.

The loss looks even worse when considering that the 76ers are far below .500 and had lost seven of their last 10 games coming into the season, notes the Denver Stiffs. Perhaps the most disappointing part of last night was watching the Nuggets, the league’s best free-throw team, shoot a less-than-acceptable 17-29 from the charity stripe. They’ve shot under 60 percent in that department in three of the last six games (via the Nuggets’ Web site).

That’s just not going to get it done in the NBA. But there isn’t much time to analyze what’s going wrong. The Golden State Warriors come to town Tuesday, and the Nuggets—the players who are healthy enough to take the floor—will have another opportunity to beat a lesser team and right the ship.