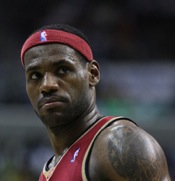 Yes, we’ve heard. LeBron James is amazing, and he will probably lead the Cleveland Cavaliers to a win against the Denver Nuggets tonight at the Pepsi Center.

Here’s a typical outpouring of admiration from Rich Kurtzman at Bleacher Report: “LeBron James is a monster on the hardwood—able to run faster, fly higher, and devour any opponent’s confidence in one fell swoop.” Kurtzman goes on shamelessly, calling James “a human highlight reel.” You get the picture. But that picture wasn’t always so.

Prior to the 2008-09 NBA season, Denver bested Cleveland in five straight games and won all but two games since James’ arrival, in 2003, notes Denver Stiffs. Last season was when things changed. Despite the Nuggets’ streaks, they couldn’t find a way around Cleveland. Tonight, the task is made more difficult, as it remains unclear if Carmelo Anthony and Chauncey Billups will play.

In six games against the Nuggets at the Pepsi Center, James has averaged a solid 25 points, writes The Denver Post. The games have been cast as match-ups against Anthony, who is dominant in the series—8-4 against James all-time.

“I think the thing that Melo should be proud of is he’s won most of the games,” Nuggets coach George Karl says. “Last year they got us, but we also got them for a couple of years.”