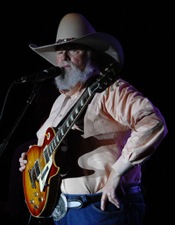 Legendary country singer/songwriter/fiddle player Charlie Daniels, of Tennessee, suffered a mild stroke while snowmobiling at his Colorado vacation home late last week. Daniels was airlifted from the Durango area to Denver and released from Swedish Medical Center on Sunday.

He “is doing well and looking forward” to starting a tour with The Charlie Daniels Band in late February in Florida, according to a statement on his Web site.

Daniels, 73, is best known for his 1979 Grammy-winning hit, “The Devil Went Down to Georgia,” and recent commercials for Geico Insurance. He says he was snowmobiling when he noticed his left hand getting numb. He figured he’d been gripping the handlebars too long.

“But then I felt the left side of my mouth growing numb and my left foot started getting hard to control, and I knew something was happening to me. I knew I’d better get back down the mountain and get some help,” he writes (via the Associated Press).

Daniels says tests show the stroke was caused by a blood clot in his brain and that he was lucky he wasn’t far from a hospital, which had only recently begun stocking a drug used to break up such clots. Moreover, a plane was available to whisk him to Denver.

“The fingerprints of God were all over my experience,” he adds.